Giveaway of the day — Zentimo 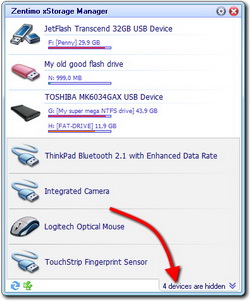 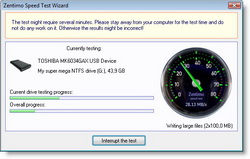 And here all this time I've just been plugging my USB drives in and unplugging them, copying or moving data, and everything this program appears to do, without incident. I can't seem to figure out what this does that current Windows doesn't do, besides testing drive speed...and I can do that with one of the several apps I have for testing drive speed. Why do I need this? It looks like a good candidate for freeware. Sorry for being so critical.

1. Drive Letter Management - Windows has this covered.
2. Portable App Quick Launcher - My mouse is set to single click, so I have this one covered.
3. Powerful Autorun - Windows has autorun, and I disable it. I don't want things running by themselves, unless I want them to. TrueCrypt is freeware. http://www.truecrypt.org
4. Enhanced Safe Device Removal - This hasn't really been an issue since Win98, has it?
5. Honest Drive Speed Test - Well, you can't have too many drive speed test apps, I guess.

"... I know now why you were always whining about the Windows Installer."

Sorry if it seems like whining, it's well documented on-line, the reason MS came out with their "Windows Install Clean Up" app, why it became so popular & so on. Oversimplified, Windows Installer stores records of where setup files are located -- if the coder using it doesn't take an extra step or two, Windows Installer can look for those setup files when they're both unneeded & unwanted. Thus when you start an app, the familiar install dialog pops up asking for install discs etc. for an un-related app mind you, & the app like as not won't run. Why complain?... The other day a poorly designed app auto-updated, using a poorly written msi file. This broke Ofc 2007. Reinstalling it was a PITA, with registry keys protected from patch installs etc., not to mention the large number of patches that had to be downloaded & applied. That was a lot of my time wasted because someone didn't code their update properly -- IMHO something worth getting upset about. **If** the coder used something else besides Windows Installer, that would not, could not have happened, thus like many, many others I consider Windows Installer a big prob. that MS should have fixed loooong ago.

OTOH from the standpoint of checking things out I prefer msi files, as they're very easy to disassemble into the individual components. That way I can spot say a C++ runtime installer that might/might not run during testing, & can see for example what if any VB components an app might add, not just what it did add for me.

"...I’m not going to push one brand over the other... but until ATI proves to me that they can write functional drivers and perform high-quality deinterlacing, I’m sticking with nVidia."

lol... 'bout being a fan boy I mean. :-) I don't really care personally, but I'm concerned that I wrote poorly enough to give the impression I was trying to boost ATI -- I'm not. The other day when I said something about advertising CUDA but not ATI stream, that was for the benefit of any developers, as I thought (& still think) that's rather poor marketing. If nVidia (or ATI) pays or through whatever incentives encourages a game company to favor their brand, that's one thing -- the game dev is entering into an agreement eyes open. When a dev is trying to make their app more successful OTOH, does it pay to discourage 1/2 or more of any potential market? CUDA may/may not be better, easier, whatever then ATI's stream -- I'm not making a claim one way or the other -- but advertising just CUDA is a bit of a double edged sword IMHO, & wanted to make them aware of that perception.

I apologize if I offended Fubar, CompNetTeach, or anyone else... That was never my intent, nor did I ever intend to imply more than I've ever written -- I'm just not a between-the-lines sort of guy. My sincere belief is that most all articles, forums, blogs, any on-line comments are FWIW opinions, free to be accepted, critiqued, ignored, trashed, or whatever the reader feels appropriate -- I mean if getting trashed bothers you, don't post on-line because sooner or later it's gonna happen. ;-) To anyone who doesn't post on-line for that very reason, my view is that much better, smarter people than I are frequently called idiots & much worse -- such is life -- so no use worrying about it... getting trashed just puts you in great company. :-)

That said, I'm 'bout as far as you can get from being a good writer, so maybe I did somehow imply something or other that I never intended to even hint at. *Maybe* a little background would help? *Maybe* if nothing else it will correct a misperception or three? I don't claim any impressive sounding credentials, & I don't claim a job implying knowledge &/or skills [e.g."As an instructor"], partly because I don't think that means a whole lot & partly because I don't like talking about myself. I try not to have a big ego -- seriously, I don't come back to GOTD once I've posted something because I'm afraid I'd start to worry about ratings, & then I might get more concerned about writing whatever for the ratings rather than simple truths. I also might get tempted to critique &/or answer critiques, & then it can become more about personalities etc. & that's not useful to you. Maybe this will help... [As briefly as I can, begging forgiveness for being OT]

I've been at this stuff a while, 1st with mainframes -- I remember when reading keypunch cards was a useful skill. In the late '80s we bought our 1st PC [the 1 MB graphics card had to be special ordered! :-) ], I hoped it would help my wife out with or for work (it did), I started learning more [DOS, Unix, graphics, DTP, C++ etc.], was on the Internet through a local edu [before there was a World Wide Web], & started helping a few folks & businesses move to & use PCs. In decent health [weight training, aerobics etc.], I went to bed one night with a bad cold, & woke up disabled. A large part of my disability is neurological, making some things difficult, others seemingly impossible. I had to re-learn how to read, more than once... If there's anything self-serving to any of my posts, it's practice so I won't have to go through that again. Otherwise my goal since becoming disabled is to learn & continue to learn as much as I can -- new research may lead to a cure or at least treatment for my illness, & I want to get back to work.

I've had enough occasional successes over the years to feel that sharing findings, experiences, fixes, methods etc. is worth it -- call it seeking good karma or just trying to be a nice guy or whatever. I firmly believe in that sort of sharing, that it makes up part of the backbone that forms the social structure of the Internet, & besides, stuff others have posted on-line has helped me tremendously over the years, so maybe I can return the favor? At any rate, I check out the software offered on GOTD because I love software, & I'm genuinely interested personally. I check it out the way I do because I want to know the effects of installing it -- some apps are truly horrible in that respect -- & if/when possible I like to dispense with the installation routines themselves... *very* often they're just a convenience that adds to registry bloat, & often include redundant installs of things like the MS C++ runtime. Often I can get away with essentially copy/paste installs on other Windows installations &/or PCs, & sometimes I can make an app portable -- I find portable apps handy because they can be stored off-disk & run on-demand when or as needed, so if someone wants to see if an app does what they need/want, or maybe needs to use an app only once, ever, that maybe saves an awful lot of bother. Of course apps don't have to be portable, but given 2 more or less identical apps, the one that is portable is almost always better coded & more effiecient IMHO because the dev put in extra time & effort to start with.

Again, I'm hoping that might help manage perceptions -- I really am not trying to be anything other than helpful, I don't post links to any site where I personally stand anything to gain etc.

Have been using this for a while, as well as its predecesor USB Safely Remove and would not be without it. As mentioned by another poster, this utility is more stable (and offers more options) than Windows method to remove drives, it allows to scan drives for faults and defects, will also list programs that are locking the drive, stopping the safe removal of the drive, it also allows for quick reconnect of USB devices that have not been physically removed.

Support from the developers is really good, although you may need to carefully explain any issues/problems/suggestions, as English is not their first language.

Hum, having to pay and to have a new driver and a program constantly running in the tray just to be able to do things that Windows can do (perhaps more easily) seems overkill to me.

The speed test is not available in Windows, that's right. So what? There are many excellent free programs to test your drives speed. And anyway, is it so important to know at what speed your drive runs? Will you buy a new one just because it is faster?

The only thing that seems interesting in Zentimo is the possibility to see what applications lock the drive so you cannot remove it safely, something that the stupid guys at M$ have neglected. But again, there are free alternatives. I have the excellent Unlocker (http://ccollomb.free.fr/unlocker/) installed on my Win7, and it does exactly that, and more. Well, you will have to right-click your drive icon and select Unlocker to see the list of the apps that are still using it, but you will have the choice of the action to take: Kill Process, Unlock and Unlock All. You can even decide to delete, rename or move the file that is locking your drive (useful in case of virus). Furthermore, Unlocker works with any file or folder, and not just with external drives. A much more powerful app IMO, compatible with x64 systems, and totally free.

Moving Story 3D
Solve the puzzles and move to the next step of the story.
Fiyat indirimi: $5.99 ➞ ÜCRETSİZ

Next Time I'm Up Reminder
Next Time I’m Up Reminder uses your motion to alert you of your tasks when you get up and start moving.
Fiyat indirimi: $0.99 ➞ ÜCRETSİZ

Rectangles PRO
Challenge people from all around the world in our new puzzle logic game Rectangles!
Fiyat indirimi: $1.99 ➞ ÜCRETSİZ