Giveaway of the day — Video Splitter 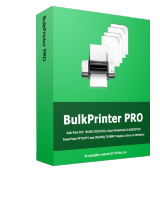 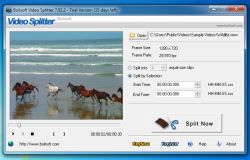 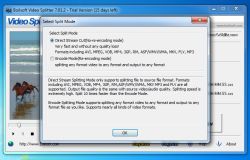 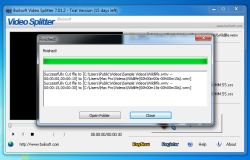 Installed easily on Windows 8 64-bit.
Nice and simple interface.
Opened a .vob file and specified to split off from the 3 minute to the 4 minute mark. The new file was produced quickly and the new filename was VTS_01_1(00h03m00s-00h04m00s) which could be very useful if pulling off multiple small pieces.
Played the clip - looks good, audio in sync with video.

When you're editing or converting video the software works similar to a player -- as long as it can display the picture it can edit &/or re-encode it. When you're trying to get away without re-encoding things become a lot more difficult, so if you often work with video it's probably worth your while to hold onto the Boilsoft Video Splitter.

Splitting video files, along with re-writing video into another type of container [e.g. .mov to .mkv or .avi etc.] can be a bit hit or miss because of the nature of the video format standards themselves -- rather than deal with exactly how video should be encoded & stored in a file, standards [specs] tend to focus on player compatibility instead, so with video shot with a still camera for example, it's common to be able to play those files just fine, but working with them may fall somewhere in between a nightmare & a challenge. Long story short, some video will open in some apps & not others, & in those apps that will open your video, re-writing the file without re-encoding may or may not work. Now if the video giving you headaches came from a very common camera then you can probably Google & find out everything you need to know about processing that video, but when the original source is unknown [as is often the case], it all comes down to trial & error. The more apps you have of this sort, the more trials you can perform, increasing your odds that *something* will work. :)

Not all types of video can be split or joined or edited without re-encoding -- it depends on the internal file structure for that format. Today video is most often encoded using key-frames [though they may be called something else, like the "I" frames used in DVD mpg2], meaning that every so often you have a complete video frame stored, with every frame in between storing or recording just the changes from one key-frame to the next. If your video uses key-frames, & if it's in a format that can be cut without re-encoding everything, if you try to cut that video at some point in between key-frames, the last frame [& usually all frames since the last key-frame] will have to be re-created & at least that portion re-encoded. Some software will just go to the nearest key-frame & be done with it, while another app might re-create & then encode those frames -- creating/encoding just what has to be created & encoded is called Smart Rendering. Smart Rendering usually depends on being able to match both the encoder & its settings, so when you find apps that can perform Smart Rendering, it's not unusual for it to *only* work if/when that video was encoded using that app in the 1st place. Cutting [or joining] a video file on the nearest key-frame isn't usually a big issue as long as you know to expect it, & as long as the video has a reasonably short time between key-frames -- most encoders I think will automatically insert a key-frame when the scene changes dramatically, which is likely just where you'd want to cut the video anyway, e.g. at the end of a scene &/or just before a commercial.

As far as different software tools go, some companies like Microsoft & Real developed basic tools for splitting &/or joining [or otherwise re-writing a file], & that code has been incorporated into different apps & code libraries often targeting video enthusiasts -- among pros there's not a huge need or market for this sort of thing so you won't often see it in an editing app like Premiere Pro. Enthusiasts have also written their own apps, often for dealing with their own particular want or need, so you see apps like mkvtoolnix & its offshoots & GUIs, and MPEG Streamclip etc. Over time portions of their code has been incorporated into the ffmpeg libraries, &/or brought together & possibly supplemented in apps like today's Video Splitter, but as above, in my experience what works best usually comes down to what will work with the video files you're trying to work with.

If you do have problems with a video file or files, remember that to be able to work with a video file you may have to 1st *repair* it, that is re-write the file so that internally it conforms to what an app expects, & you may have to re-write the video file using another type of container [you'll find repair utilities at sites like videohelp.com]. Bear in mind that the video stored in a file is very often separate from the container holding that video -- the VOB files on a video DVD &/or .m2ts files are maybe more well known examples, with others including .avi, .mov, .mp4, .mkv & so on. Conforming to what an app expects is [sadly] a gray area -- in some cases where you've got particularly difficult video you may try a dozen apps, finding that less than 1/2 will accept or take your video file, & out of those maybe one will do the job, re-writing the video file without errors [or at least without errors that prevent it from working].

Again, if you know the source of the video, Google, e.g. if you've got a camera that you used to shoot video & you're having trouble with that video, try & save yourself some time & effort by searching [including your camera make/model] to see if someone's already done all the hard work, figuring out the procedure.

Installed on XP sp3 without a problem.
I tried a few short video clips of different formats. It worked quickly and flawlessly on all of them including FLV and MP4.
Maybe Asharif at #1 used an older version as I also got 'preview' and 'play' on these formats, also I am not sure why you would need a 'batch' facility as cut-off time would be surely be different on each video.
The only gripe I have with this software is the screen size. It is stuck at 'small size' without even a 'full-screen' otion. It is also too expensive at $35. $15 is a more realistic price for this kind of software.

WorkOther - Custom Workouts
Have you ever bothered looking for appropriate workouts on your watch?
Fiyat indirimi: $0.99 ➞ ÜCRETSİZ

Word Search Games PRO
Challenge other people from all around the world or play in a relax mode without a timer!
Fiyat indirimi: $2.49 ➞ ÜCRETSİZ