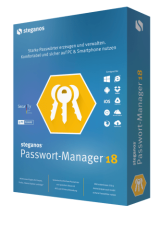 HP SimplePass
Log in to your system and web browsers using fingerprint management.

Confusion / concern is apparent on this thread as to whether Steganos has gone the same route of some other developers (like iObit) and is offering rentalware instead of owned-outright software.

Steganos's policy is to sell, outright and with a single one-time billing, the current version of any of its products for lifetime usage on one or more PCs. If a new version is developed and released, then it can be purchased at an "upgrade price". (For example: Steganos Password Manager 19 is presently on sale via the developer's website for $24.95. Owners of SPM versions 16,17 or 18 can purchase it for $14.95.)

There is no compunction to upgrade. If you're happy with what you own, then you'll stay happy. If, however, you purchased on the assumption that your lifetime ownership includes lifetime upgrades of that product, then you may become unhappy. But caveat emptor applies as much to buying software as it does to buying anything else. . .

Today's giveaway of Steganos Password Manager 18 -- that is, the version preceding the current release -- is not a trap to catch the unwary but an opportunity to try and, if appropriate, keep. As such, the offer is appreciated.

In terms of usability / desirability, only an individual user can pass judgment. I've used this PM in one of its earlier guises. It worked as promised, and according to expectation.

I did, however, note that a new version always came at further cost, and while there's nothing at all wrong with that, it was evident that other developers in this same market sector offered product whose license terms include all future updates and all future versions, albeit at a considerably higher price.

The thing to do was wait for such a developer to have a special promotion.

And so it is that I have Sticky Password on a lifetime license, including all updates, revisions, new versions etc, for less than $30.

For all I know, Steganos may come along next week or next month (or whenever) with a similar offer. At the moment though, the situation's perfectly straightforward: here on GOTD today there's PM18 for nothing, and if you take it and then like PM19, you'll get a $10 discount on that new version.

MikeR, I made the comment I made because Password Manager 18 is not, in fact, $24.95..it is $0 as it is unavailable from Steganos. If you are going to advertise something is usually a price, it means it is in-stock and is usually that price, not a defunct piece. Should Steganos had offered the Password Manager 19, which is $24.95, then I would have not made the comment at all. "The program is available for $24.95, but it will be free for our visitors as a time-limited offer". No the program is not available, and yes it is rentalware, to a point. Rentalware in the fact that should something happen and render your PC or its hard drive inoperable, this software cannot be re-installed. If I can re-install it with full operations and it is not the free trail version I am reverted to, then I consider it non rentalware, even if it is an older "model". All my software that is downloaded is kept off the hard drive, along with the activation codes for this very reason.

I also commented, and meant every word, that I appreciate, very much, the work the GOTD team does in procuring software..I have a great many of their downloads, which I have, in fact, re-installed a few times and have auto updated themselves, I consider these to be not rentalware. Others have either reverted back to "free" versions or have had to leave by the wayside as they had to be bought or their advertised 1 year licence was up and no trial . Those, too, I consider expireable/renatlware, but again, I am happy to have tried because they were the most up to date version, at that time, when the author placed them in GOTD hands. Remember it is the authors who place the stipulations to GOTD, on what happens to the licence/activation code.

And to the GOTD crew, 2 thumbs up for doing what you do!

P.S. to MikeR: keep commenting the way you do. While some may disagree at times, the comments are welcomed, and in some cases, very helpful.

Is this a one time install or is it a subscription where we would need to renew every year?

Jack Ass,
Your "answer" completely fails to address the question Jonathan asked.
I went to the Steganos website--and even there it dodges the matter of one-time payment or annual subscription. Not helpful!
I looked further on the website, under "Contact", which leads to "Customer Service and Support." I went through the menu to ask about this, and since none of the FAQs were relevant, it led me to "Please check if your problem can be solved in our Steganos Support Forum." I clicked on that link... and it doesn't exist.
I'd say customer support from this company is zero. Better off using a product which has been tried and tested by lots of people.

Starlight
Point your iPhone like a magic lens into the night sky, and see the stars, planets, and constellations hover above.
Fiyat indirimi: $2.99 ➞ ÜCRETSİZ

Pro Wrestling Simulator 2022
Do you miss playing the role of a General Manager on your PlayStation 2 back in the good old days?
Fiyat indirimi: $4.99 ➞ ÜCRETSİZ

Dungeon Shooter V1.2 : Before New Adventure
Killing monsters in the dark dungeon and get all kinds of guns, pets and treasure.
Fiyat indirimi: $4.99 ➞ ÜCRETSİZ