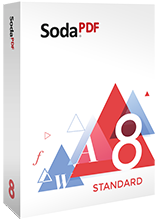 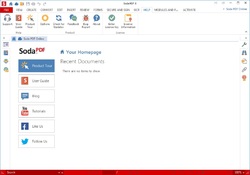 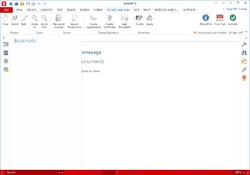 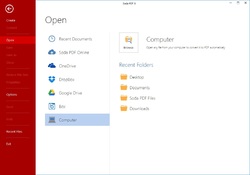 Installed and registered without problems on windows 10 (64-bit). It downloads individual components like create, review etc. from internet.
It seems OCR and review is not available with this GOTD edition.

My impression of Soda PDF has always been favourable, as far as features and quality are concerned. Last time, however, I aborted the installation, since my AM asked me whether I consented to the program changing some of my system files. May have been harmless, but I did not like it, so I quit.

Installed with my Shadow Defender on. I had 4 or 5 warnings from Winpatrol about processes being entered into my startup or DLL's entered for my browsers. Too many for my taste. I will stick to Foxit portable.

The word "hubris" could well have been invented for LULU Software, because its slogan - SMART & SIMPLE - is shredded by an installation routine that not only is one of the worst I've ever encountered, it's so epically counter-productive that the developer shouldn't be surprised if many a prospective customer gives up on Soda PDF because they've lost the will to live.

Installation offers a default click-thru option -- something no-one should ever agree to withany software, if, as here, they've a choice of options -- and an 'Advanced options', which in typical style of just about all software nowadays, isn't advanced at all, rather a means whereby the user can exert at least some control over what gets shoved onto her / his machine. In my case, I checked the boxes for 'optimized installation', 'create desktop shortcut', 'run Soda PDF 8', and (with some misgivings) 'install Soda PDF Notification System', this otherwise garrulous developer not bothering to explain what that system might be. I also checked the install boxes for the Soda PDF8 (Main Application) and the Soda PDF 8 Modules.

So far, not so simple. But at least, not so difficult. At the next screen though, the user certainly does need to be smart, even if the install routine isn't: both the check boxes for something called Ad-Aware Companion and the substitution by Microsoft's Bing search engine of whatever you've set up as your home page in your browser (mine's 'blank') are already ticked. They shouldn't be. To uncheck the Bing takeover, it's necessary to leave the Ad Aware Companion box checked. Trying it the other way around won't work. So-oo. . . first uncheck Bing, then uncheck Ad Aware Companion. And then, with both boxes unchecked, click on the SKIP button. (You could, of course, trust the developer and ignore the boxes and merely click on SKIP. But only if you're more trustful than I am. And only if you think SKIP means skipping an entire process, rather than skipping your opt-outs.)

I then continued with this installation, taking a screen capture at every stage -- standard practice, smart not stupid -- with those two check boxes unchecked and the SKIP hit by way of testing out its meaning and then, then:

Now, Mr Today's Developer. I am very, very picky about what I allow to be added to my browser. Picky to the extent that any developer who comes along and starts loading it without a word of explanation as to what they're doing doesn't get on my Christmas card list. As I haven't a clue why LULU wanted to install the extension, I hit the 'Reject' button on Kerish Doctor 2016 as well as WinPatrol (which by now was also flagging up a similar alert.)

Onwards and upwards then, except there's now yet another screen to contend with, all about 'virtual drive integration' and saving files to the Cloud, a facility which this developer could -- and should -- have kept out of the install routine and offered later: it really isn't A Good Idea for any computer user to start associating new, untried software from an untried source with her / his personal OneDrive, Dropbox, Google Drive and Box sign-ins. Or connecting to Evernote. All of that can be done at a later stage -- if the user wishes -- rather than clogging up the install.

So. Is it over yet? Er, no. The install routine from a developer touting its wares as SMART & SIMPLE is not only becoming less smart by the second, it's also becoming ever more complicated. The next screen from the "Soda PDF Setup Wizard' now wishes me to provide my first and last names and email address so as to receive a FREE Activation Key to "unlock the Create module as well as useful tips and exclusive offers". That I actually don't want the 'useful tips' and certainly not the 'exclusive offers' is besides the point; what I want is the 'Create module' which, apart from any other consideration, I'm already advised by the developer is included as standard in this version (so why am I having to ask for it?) and which has already -- for reasons unknown -- been the cause of the developer's attempted, though failed, endeavor to add an extension to my Firefox browser.

Ah well. Moving on . . . It seems possible that we might just -- just -- have reached the end of this anything-but-smart, anything-but-simple install routine. But no. Now, now: "Save, Share and Access your documents online!". Ye gods: yet another screen. And though I've already spent time, filling in my first name and surname and email address on the earlier one which said I had to do that if I wanted the FREE 'Creator' module, now this latest screen seeks. . . exactly the same information.

It is very possible that young men will suffer age-related baldness and young women pass clear through the menopause by the time they have managed to install this software on their computers. As I am of more advanced years, it seemed rather more possible that between downloading Soda PSDF8 Standard and actually being able to use it, I would be in a retirement home for the bewildered and on full-time medication. As yet, that hasn't happened. But then, as yet . . . I haven't actually used this software.

Thanks, then, GOTD, and thanks -- maybe -- to LULU Software. But having backed out of that latest install screen asking me to sign up for tips and offers when I've already had to sign up for a FREE module that I was told was already in the 'Standard' version, the installation froze and I killed it in Task Manager. I now haven't a clue whether this program will run or not. And candidly, after the idiotic mess that this install routine truly is, I'm not actually sure I have any strength left ever to bother to find out.

I think I might just stick with the delightful free toolkit from this long established freeware specialist:

where install and opening usage of its apps takes less time than having to deal with just one of Soda PDF8 Standard's install screens. And no license keys ever needed, either. Whatever else today's developer may or may not know about PDF management, it clearly hasn't much of a clue when it comes to installation routines, or of making a good first impression. And that's not so smart at all. . .

Wow! Even after it's finished installing on my Win 7 desktop PC, just with having it still open and waiting for the activation key to arrive, so that I can complete the installation, this has upped the memory usage by 25%! Not very impressed by that...

Sunnaze
So after activating, a new pop-up opens offering a FREE activation key to unlock the Create module as long as you opt in for 'useful tips' and 'exclusive offers'!? During installation, I'd expanded the Advanced Options, and the Create module was already selected as standard, and couldn't be unselected. When I submitted my name and e-mail details after installation, in order to receive the activation key, I unchecked the box to receive updates and special offers, but it looks like agreeing to receive their mails and special offers is a condition to be able to use the Create module anyway!